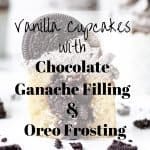 Oreo has got to be one of my favorite flavors. Cookies and cream ice cream has always been my go-to and, to this day, it still ranks up there as number one. My kids have clearly inherited that gene from me because they are also huge fans. We’re the family that buys every new flavor of Oreo cookie (except peanut butter!) as it comes out so we can try them all. I wanted to find the perfect recipe in which to use these chocolate sandwich cookies in a few different ways . So I made Oreo cupcakes – a moist vanilla cupcake stuffed with chocolate ganache with Oreos mixed in and topped with a heavenly smooth Oreo buttercream frosting. Nailed it!

For the love of all things Oreo

Growing up, we were very close with all of our neighbors. My sisters and I used to spend a lot of time running between each other’s houses. We often stayed overnight at our neighbor’s houses, too, ate meals together, played massive games of manhunt and put on Labor Day shows in “the court” (the cul-de-sac on which my family lived) with all the neighborhood kids. My neighbor Karen and her family kept kosher, so they could only have Hydrox Chocolate Sandwich Cookies instead of Oreos (this changed apparently in 1998 when Oreos began certifying their cookies as kosher. Thanks goodness for the internet!). I didn’t care! They tasted practically the same. And I think this is where my love for all things cookies and cream originated. From the second drawer down to the left of Karen’s fridge where all the Hydrox cookies were stored.

Now that you have a little history, let’s dive into how these cupcakes come together. Since I was looking to incorporate Oreos in a few ways into this cupcake, I decided to stuff them with this glorious chocolate ganache then top them with Oreo buttercream. So, there are a few steps here, but they’re all pretty easy to prepare and put together.

I used my good ol’ standby vanilla cupcake recipe from Magnolia Bakery for this stuffed Oreo cupcake. Why not a chocolate cupcake, you ask? Well, of course it’s because (a) I’ve been making an awful lot of chocolate lately, (b) my younger daughter prefers vanilla over chocolate so I have to spread the love, and (c) I thought it might be just a tad too much chocolate with chocolate cake plus chocolate ganache. Turns out, the balance of the moist vanilla cake with the rich filling and creamy buttercream works perfectly!

After the cupcakes are baked, stuff the centers with the chocolate ganache. Chocolate ganache is basically melted chocolate with heavy cream. For this filling, I mixed in more Oreos to give it some added texture and flavor. The frosting is a basic buttercream with finely crushed Oreos added in. 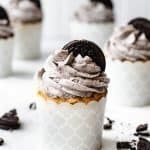 A moist vanilla cupcake stuffed with chocolate ganache mixed with Oreos and topped with a heavenly smooth Oreo buttercream frosting.