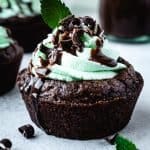 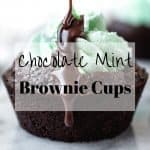 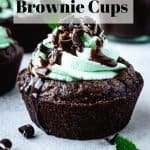 Where my chocolate mint lovers at?! From Thin Mint Girl Scout Cookies to Mint Chip Ice cream to Peppermint Patties, chocolate and mint have proven they belong together as one of the world’s most compatible flavor combinations. I’m adding another fabulous chocolate mint treat into the mix with these delectable Chocolate Mint Brownie Cups. Let’s dive in!

Please note: Eagle Brand® Sweetened Condensed Milk has sponsored this content. All opinions are my own.

In creating a new chocolate mint recipe, I wanted something relatable and accessible to the home baker. There are a few components to this recipe, however, each one comes together rather easily. I intended the brownie recipe to mimic that of a boxed brownie mix in terms of the sturdy yet chewy texture it creates. And, a little shortcut for you with this recipe if you are short on time or don’t have the necessary ingredients to make the brownie recipe below- just use a boxed brownie mix instead! It’ll save you time and you’ll still end up with a delicious chocolate mint brownie cup. And believe you me, no judgment whatsoever for making life easier! I’m all for that.

You’ll have some leftover ganache after you’ve filled all the brownie cups. Save this for drizzling on top of the mint whipped cream before serving. And eat the rest with a spoon!

Is there anything better than freshly made whipped cream? I don’t think so. And for this brownie cup recipe, this is where it all comes together. A few drops of peppermint extract, a bit of powdered sugar, and a few (optional) drops of green food coloring added to achieve that iconic soft mint green color make this the perfect topping for our brownie cups. Homemade whipped cream is thicker and richer than store-bought and allows you to control the amount of sugar going in. The store-bought stuff has lots of other not-so-natural add-ins as well – no bueno especially when you can make it so easily yourself at home!

When it comes to the mint flavoring, definitely use peppermint extract versus spearmint for this recipe. Spearmint will taste more like toothpaste and we certainly don’t want that ruining our perfect chocolate mint brownie cups.

For even more brownie recipes, give these a try:

Chocolate and mint have proven they belong together and these delectable Chocolate Mint Brownie Cups prove that once more!

Thank you to Eagle Brand for sponsoring this post!