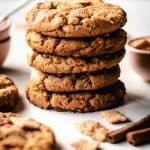 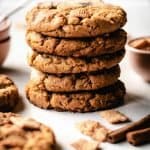 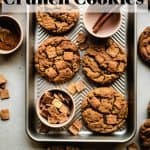 Finding new ways to use childhood favorites like Cinnamon Toast Crunch cereal in easy desserts is always so fun! And super tasty. This recipe will make you feel nostalgic for those days of scarfing down the cinnamony sweetness of this cereal while reading the back of the cereal box before heading off to middle school. These delicious cinnamon toast crunch cookies are packed with cinnamon sugar flavor, crisp on the outside and just the perfect dessert to make with cereal.

Desserts with Cereal in Them

If your family is anything like mine, we go through a lot of breakfast cereal. And, we always seem to have multiple half-opened, half-full boxes. Why is that?!

What better way to combine flavors we love with desserts we love. And are bound to consume. Much more so than the leftover plain cereal for some strange reason....

Maximizing the Cinnamon flavor in these Cinnamon Toast Crunch cookies

In creating these cookies, I was looking for a crisp exterior to mimic the crispness of the Cinnamon Toast Crunch cereal.

And, of course, I was looking for as much cinnamon sugar flavor as possible to capture the flavors of this breakfast cereal.

There's no mistaking what they are when you look at them and certainly not when you take a bite!

This recipe calls for chilling the dough at least 12 hours before baking.

I tried baking them right away after making the dough and while they were good, the Cinnamon Toast Crunch flavor truly shines once the dough is allowed to come together overnight.

If you are looking for ways to boost the cinnamon flavor even more, see my tips below for infusing the butter with cinnamon.

Looking for more cookie recipes? Give these a try:

These Cinnamon Toast Crunch Cookies impart loads of cinnamon sugar flavor and texture to bring this nostalgic cereal treat to life in a fun dessert!

* The % Daily Value tells you how much a nutrient in a serving of food contributes to a daily diet. 2,000 calories a day is used for general nutrition advice.