There's nothing quite like fresh cinnamon rolls to start your weekend mornings. The warm flavors of apples, cinnamon and brown sugar make these Cinnamon Rolls with Apple Pie Filling perfect for cozy Fall breakfast or brunch!

Prepare to be wowed by the soft, pillowy cinnamon rolls with apple pie filling. And of course, these wouldn't be cinnamon rolls if they weren't topped with generous drizzles of sweet cream cheese icing!

Disclosure: I have included links to some great products and services that I think you’ll love. I use them myself and only recommend them because I love them. If you purchase via the links I may earn a small commission. As an Amazon associate, I earn from qualifying purchases.

A Fall Version of a Breakfast Favorite

Cinnamon rolls are always a weekend breakfast or brunch treat. With this recipe, we take a traditional cinnamon roll recipe and add a filling of warm cinnamon and caramely apples.

There are a few tricks to ensuring these turn out successfully.

Unlike my one-hour cinnamon roll recipe, I recommend allowing the dough to chill overnight in the fridge. This allows the dough to become easier to handle when filling with the apple pie filling.

As an added bonus, the dough will develop more flavor with an overnight rest. This is not to say my one-hour cinnamon rolls lack flavor!

That recipe comes with the huge upside of convenience - prepare, bake, eat all within a short timeframe.

The dough for this recipe becomes a bit sturdier when it's chilled, so it holds up to the filling much better than if you did not chill the dough.

I know this is not a very scientific explanation, but this is the homebaker method that has worked for me over and over!

This filling is a take on the topping in my Caramel Apple Cheesecake Bars. It's filled with chopped tart apples, brown sugar, butter and cinnamon.

I recommend cooling and/or chilling the filling before spreading onto the chilled dough. Since the filling contains a decent amount of liquid, chilling or cooling allows the filling to set up a bit more, making it easier to spread then roll up.

To avoid the filling from spilling out when you're rolling the dough, spread the apple filling on just the half of the dough closest to where you begin rolling. As you roll, the filling will get pushed slightly toward the other half and it will not spill out over the end.

And, don't worry if some of the filling does spill out! Cinnamon rolls are not meant to be perfect. They're meant to be delicious!

Once you've filled these cinnamon rolls, carefully slice them using a sharp knife into eight large rolls. Allow them to rest then bake!

And don't forget the cream cheese icing. Add the icing when the rolls are still warm but not too hot otherwise it'll melt. Serve the cinnamon rolls warm.

Can unbaked cinnamon rolls be frozen?

Yes! After the cinnamon rolls have been filled, rolled, and cut into 8 pieces, place them in the baking tray and allow them to rise for 40 minutes. Cover the pan tightly with a double layer of plastic wrap and freeze up to one month. Defrost at room temperature for one hour before baking.

Can I freeze baked cinnamon rolls?

Yes! Allow the cinnamon rolls to cool completely then wrap them tightly in a double layer of plastic wrap and freeze. They may be frozen with or without the cream cheese icing. I like to wrap them individually so that they may be defrosted one at a time. Defrost at room temperature then warm in the microwave or in the oven set at 350ºF (177ºC) for a few minutes until warm.

Can I substitute canned apple pie filling for the homemade filling in this recipe?

Looking for more apple recipes? Give these a try:

FOR ALL MY FAVORITE BAKING TOOLS INCLUDING THOSE USED TO MAKE THIS RECIPE, CHECK OUT MY BAKING RESOURCES PAGE! 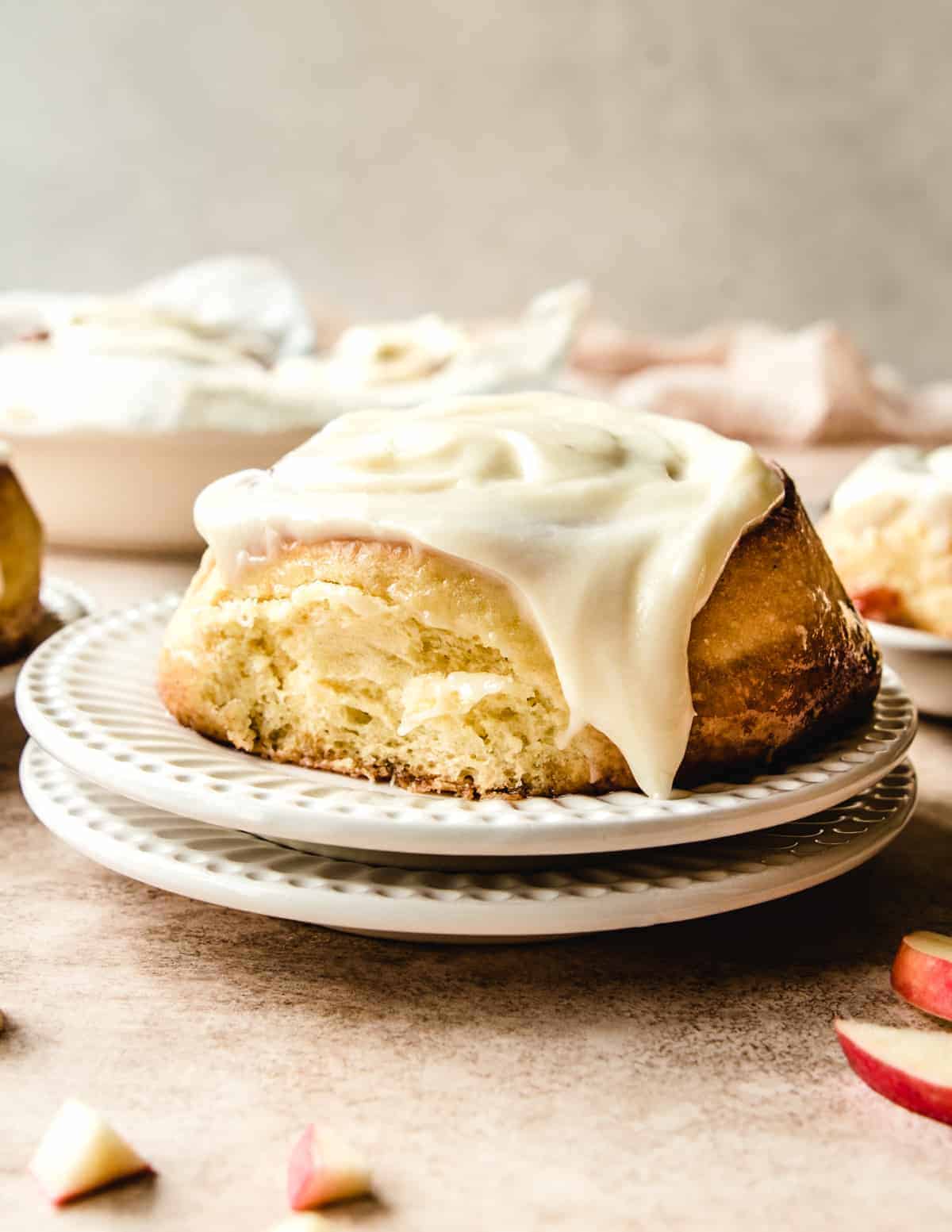 Calories: 300kcal
Did you make this recipe?Tag @kickassbaker on Instagram so I can see!

SAVE THIS RECIPE FOR LATER! PIN THE IMAGE BELOW TO PINTEREST

Hey there!  Thank you so much for visiting Kickass Baker!  I’m Kim, the working mom and home baker behind this blog.  I know how crazy life can be.  Too often, we can beat ourselves up and give up things we enjoy because we think we aren’t great at them.  But you are kicking ass everyday and I’m here to help you bake up some crazy-good recipes and embrace your Kickass Baker!