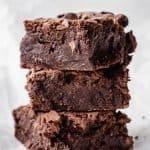 The Gift of Time

So here we are! On my blog, Kickass Baker – a new, wonderful place on the world wide web that I get to call my own. And I’m thrilled to be here!

I have been procrastinating my writing of this first blog post (like I do well with so many things!) because I thought it had to be just perfect.

But, after listening to the inner voice in my head, which this time conjures up one of my oldest and dearest friends, Karen, in a conversation we had recently about how to get started on something new: I need to just start. And, so off we go! 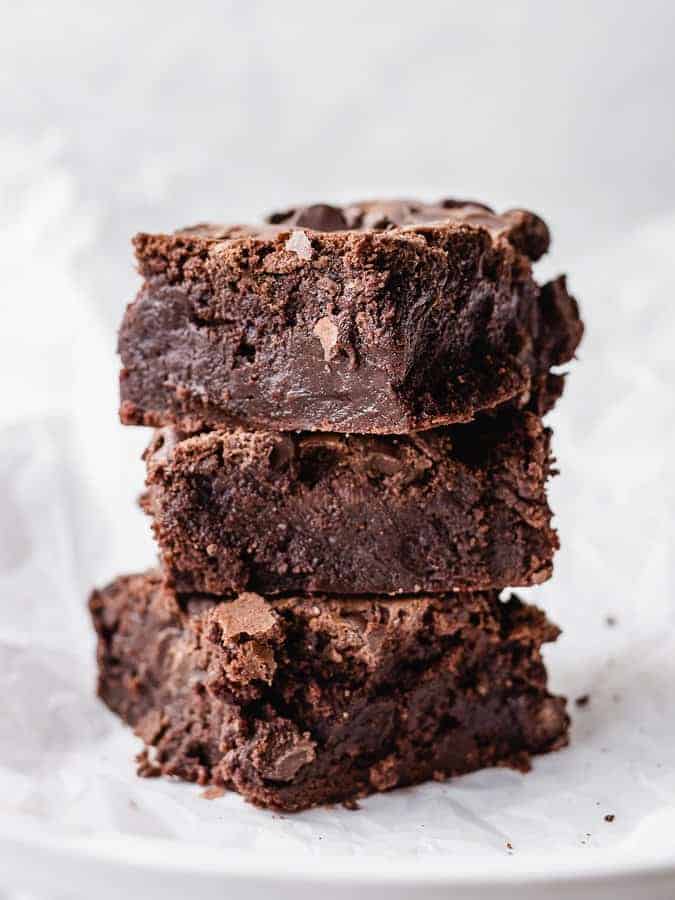 This post may contain affiliate links. If you click on a link and then make a purchase, I may get a small commission from that sale, at no extra cost to you.

I have always considered myself a strong writer and I have really admired those who do it, for hobby or as a business, and wanted to get into writing a blog for some time. I am fortunate right now to have the time to do so! You see, I’ve always worked full-time.

For the past almost 19 years (wow, I didn’t realize how long it was until I typed that out!) I have worked in corporate America in a field I really like, doing the 9-5 thing.

In addition to being a mom. And a wife. And a sister. And a baker and cook. And a knitter/crocheter. And a reader. And an aspiring fitness fanatic. And a tv watcher. And many other things that have occupied my time fully and then some.

But then, in late September last year, I made the decision to leave my employer and take a severance package. It was a relief!

I wasn’t happy to be where I was and that was affecting my overall happiness. And when I was offered this opportunity, it was a very easy decision.

One in which I was fully, 100% supported by my sister (who was the voice of reason in so many ways) and my husband who said “take the money and run!” And so, I did.

The first few months were wonderful! I was still getting paid my full salary, it was the Fall so the weather was beautiful, and the holidays were coming up – so, naturally, the first thing I did was bake. And bake some more. And bake even more.

I had always wanted to make my own sourdough starter and learn to bake tangy, crusty sourdough loaves – I now had time and I did it! I wanted to bake cookies of all kinds and cakes and challah bread and babka and baguettes. I did it all!

It was wonderful to have the time and to take advantage of that time and to feel this sense of freedom that the day was mine (well, between the hours of 8am and 3pm anyway – I have two school age kids) to do with anything I please.

I also organized my basement, sold tons of our old things on eBay and Facebook marketplace, went to lunch with friends, shopped, did laundry on Wednesday afternoons and grocery shopped on Tuesdays – because I quickly learned that Monday mornings are no less crowded than weekends thanks to the busloads of seniors that get dropped off at the ShopRite at that time – instead of cramming it in on Sundays along with everything else on my to do list.

Come January, that freedom and sense of the day being all mine gave way to a slight panic that I now needed to look for a job because my severance was soon coming to an end. And, I also felt something I didn’t expect, which was that I had lost a purpose.

This could have easily turned really bad, but it didn’t, don’t worry, but there were certainly days where I felt sort of, well, lost. I was getting very few calls for a job, the holidays were over and the cold, dark days of winter were fully upon us.

And, the sense of “freedom” I felt before now sort of felt like a long, no-end-in-sight black hole of time with which I no longer knew what to do with myself. I found myself looking forward to when the kids came home from school because there’d be more energy in the house and practices to take them to, and dinners to cook.

Then there was my sister, who everytime I told her I was feeling sorta eh and lost, would say “But you have all this time! And you know you’re going to get a job at some point, so enjoy it now! PS I’m super jealous you get to go back to bed after the kids get on the bus in the mornings…”

And finally, one day I said I’m going to take advantage of this gift of time I was given because I don’t think I’ll get this opportunity again.

And, more importantly, I will certainly regret not having done more of the things I always said I wanted to do if only I had the time.

So, fast forward to this week – it’s the first week in May, it’s finally warm and Springy outside and I have launched my blog. Yay!! So, where did the name KickAssBaker come from, you ask? Well, the story goes like this:

My sister and I used to love to bake cookies after school when we were teenagers. Not the from-scratch chewy, chocolatey goodness that I bake now, but the from-a-box kind.

We loved to eat the batter, we loved the way the house smelled when they were baking and we loved eating and sharing (sometimes) those perfect little processed pieces of heaven.

Skip ahead a few years to after college, my sister (her name is Robyn, I’ll start using her name instead of “my sister” – my husband hates when I do that anyway because I have 3 sisters and when I say “my sister” he never knows which one I’m talking about. But, if he followed along and listened carefully to the contextual clues in my monologue about whatever it is that’s going on that day, he’d be easily able to figure it out) and I bought a townhouse together and we started really cooking and baking.

From scratch. And it was amazing.

One of the very first recipes that we sort of became known for and which was requested by family and friends repeatedly was a recipe that was given to us from our middle* sister’s friend, Jen. And it was a recipe for… wait for it… Kickass Brownies.

These brownies are ah-mazing! They have very little flour and lots and lots of fudgy chocolate and butter and chocolate chips on top and when you cut into them, they fall apart so you end up pushing together crumbs from the pan and putting them into your mouth. They are to die for!

So, when I was brainstorming ideas for what to call my blog, Kickass Baker popped into my head!

For many other reasons I think this is appropriate – 1) it was available 2) the word “kickass” seems borderline inappropriate but is nowadays much more acceptable a term but still makes me feel a little badass 3) my blog, while about my love of baking, also centers around my renewed sense of purpose, which is to kickass as much as possible at being a baker, a mom, a wife, a sister, a daughter, and a friend. And, eventually again, a colleague at work.

It energizes me and gives me a sense of “yeah, I got this!” 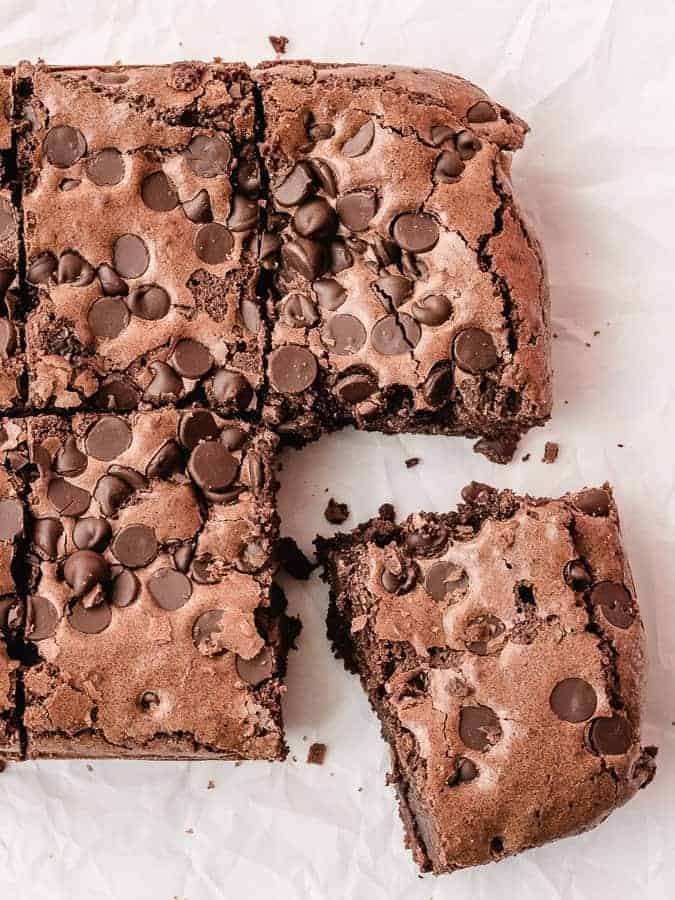 Here is the recipe for Kickass Brownies. Robyn and I later found out that this recipe is actually a very similar, if not exact, version of a Mrs. Field’s recipe. But, we much prefer the name and sentiment behind Kickass Brownies so they will forever have a place in our hearts with that nickname. 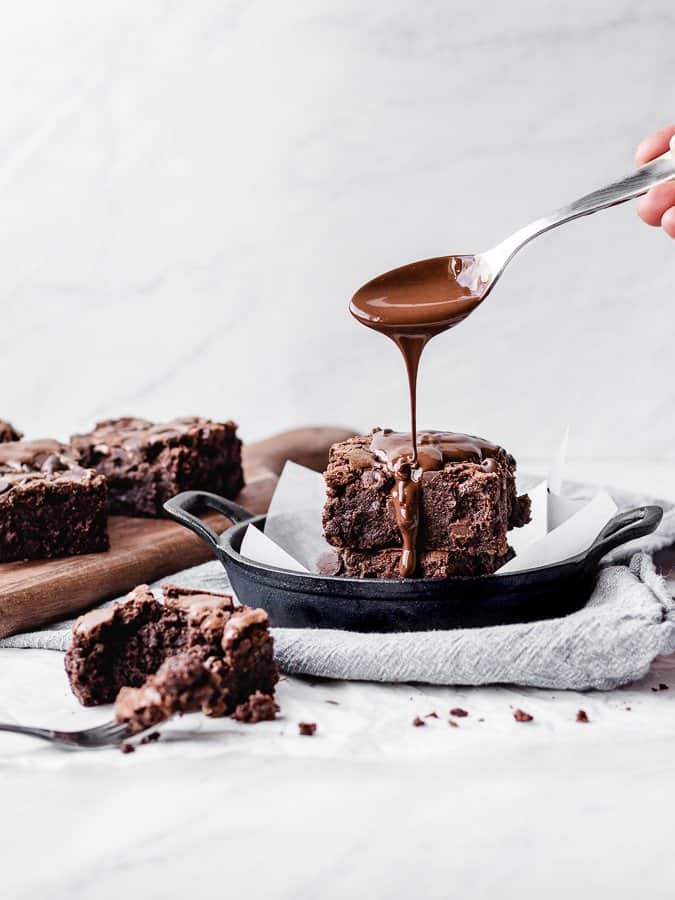 Fudgy, rich, dense, oh-so-chocolatey brownies that you and your guests will come back for again and again!

Thank you for visiting and reading and going along on this journey with me. I think it’ll kick ass.

*A note: yes, I did say I have 3 sisters which means there’s 4 of us but I also said “my middle sister” which kinda doesn’t work out mathematically because there’s no middle in 4 (and to answer everyone’s first and second questions: no, we don’t have any brothers and no, my dad never felt like he got the short end of the stick – usually we hear “oh, your poor dad…” – believe me, he doesn’t feel this way and he still didn’t feel that way when the first 5 of his grandchildren were all girls either). Robyn and I are twins and we are 3rdand 4th, so we consider Steph to be our middle sister because she’s between the youngest and the oldest. There! Now that’s out of the way..

Pin this recipe for later! 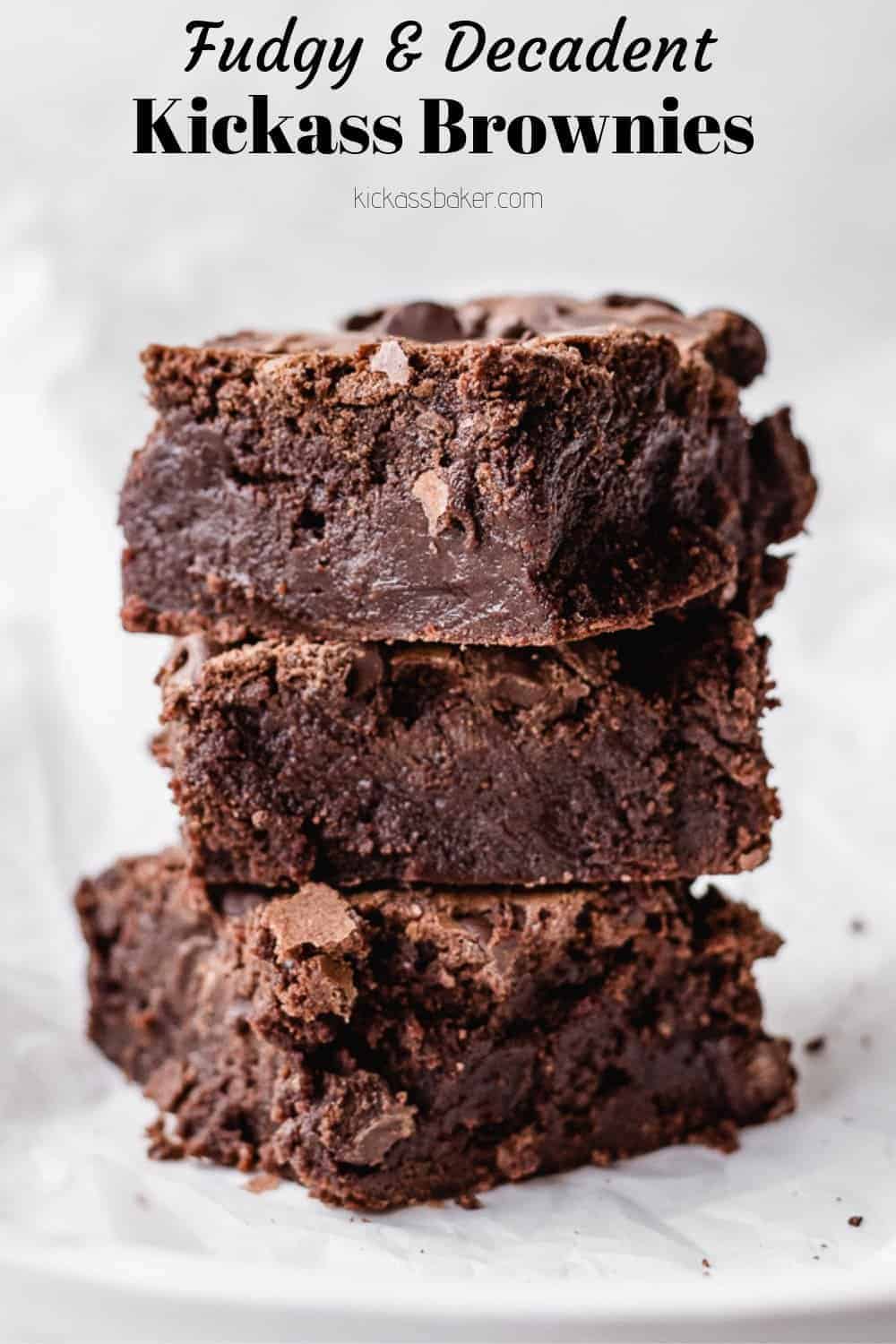 Notice: We are a participant in the Amazon Services LLC Associates Program, an affiliate advertising program designed to provide a means for us to earn fees by linking to Amazon.com and affiliated sites.