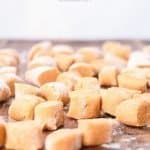 Sweet Potato Gnocchi is a Paleo or Gluten-free eater's dream come true! Not only is it not meat (I mean, I love it, but need a break from it sometimes), it's hearty and filling and made from real food. Actually, it's made from exactly 3 ingredients: sweet potatoes (duh), cassava flour, and salt. That's it! Nothing more to it. And it's a delightful break from all the meat and eggs us Paleo dieters eat a lot of.

How to make Sweet Potato Gnocchi

Making Sweet Potato Gnocchi takes a little bit of time, but it's well worth it. I like to make a big batch and freeze it. That way, I only have to put in the effort once in awhile, but reap the benefits for many weeks.

This recipe calls for about 4 pounds of sweet potatoes. I buy the big ones and go for organic, if it's available. Peel the potatoes and cut them into chunks then cover with cool water in a large stockpot. Bring to a boil and continue boiling until the potatoes can be easily pierced with a fork or knife. Drain then mash the potatoes with either a potato masher or a fork. Add in the cassava flour and form into a dough. You can add in more flour, if needed, or if your potatoes were very large. You want to form a dough like the one pictured below, not too sticky, but not too dry either.

A Word about Cassava Flour

If you have never heard of or used cassava flour before, it's made from the cassava plant which is a starchy, high-carbohydrate tuber, similar to yam, taro, plantains and potato. Cassava flour is gluten-free, grain-free and nut-free - a great substitute for wheat flour for us Paleo or gluten-free dieters!

Moving on: Once you have a ball of dough, cut it into 4 relatively equal parts (doesn't have to be exact) and one at a time, roll out into long tubes, about an inch thick in diameter, like in the picture below.

After you have 4 long tubes of dough, cut each one into small pieces about an inch wide using a bench scraper or sharp knife. You can get all fancy and use a fork to press into each piece of gnocchi to look like the kind you see in restaurants, but as you can see from my photos, I skip that step. It's usually just me eating it anyway!

At this point, the gnocchi needs to be boiled for a few minutes. In a very large stockpot (same one you used to boil the potatoes works perfectly), boil water then carefully place a handful or so of the gnocchi in at a time. You don't want to overcrowd the pot. I use a spider (pictured below) to carefully lower the gnocchi into the boiling water and to remove the gnocchi once they've floated to the surface, indicating they are done. Repeat until all gnocchi have been boiled, placing the finished gnocchi in a single layer onto a sheet tray.

Cook some now, Freeze the rest for later

At this point, you can add these to a dish or you can freeze them for later. I usually reserve some for cooking now and the rest go straight into the freezer. To freeze, stick the sheet tray with the gnocchi in a single layer into the freezer and freeze for at least 2 hours. Once frozen, place in a freezer safe ziptop bag. Freezing them this way prevents them from freezing altogether in one big clump. You can remove as many as you need for your recipe when the time comes.

I like to pan fry these in a nonstick pan with some ghee or olive oil until they're browned and crispy - yum! You can serve plain, with some broccoli and parmesan cheese (omit or substitute with nutritional yeast if you're dairy-free) or substitute in any pasta dish. I have a really good recipe for Sweet Potato Gnocchi in Sage Bacon Sauce coming soon! The pic above gives you a sneak peek of what it looks like. Delish! Even my husband loves it and he is not a follower of the Paleo or gluten-free diet. Score!

Sweet Potato Gnocchi is a Paleo or Gluten-free eater's dream come true! It's hearty and filling and made from just three ingredients.

* The % Daily Value tells you how much a nutrient in a serving of food contributes to a daily diet. 2,000 calories a day is used for general nutrition advice.

Pin this recipe for later!