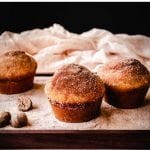 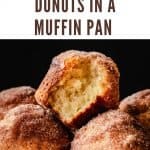 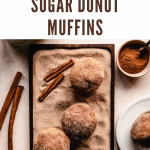 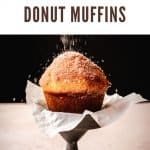 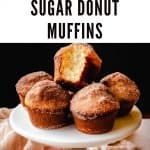 Did you ever just really want a donut but also really wanted a muffin at the same time and just couldn’t decide? Yeah, happens to me all the time, too.

Introducing you to one of the greatest hybrid baked goods of all time, the Donut Muffin! Has all the flavor of a donut with the ease of making a muffin.

And this donut muffin is dipped in melted butter then coated with cinnamon sugar making this recipe a must-make for any home baker and a must-eat for, well, everyone!

Why Donut Muffins are worth making

Baking requires some work. Getting out the mixer, creaming butter and sugar, mixing, blending, stirring, baking.

Then comes all the dishes that need to be cleaned.

And some recipes obviously require more work than others and oftentimes it’s difficult to know for sure if a recipe is worthwhile enough to put forth such effort.

Typically, donuts can be a lot of work. Frying is usually involved.

And while making them is often very rewarding, sometimes you just want a shortcut.

A fast pass, if you will, to the end point when you get to enjoy the fruits of your baking labor.

Well, friends, I am here with that shortcut. Making donuts in the form of muffins not only cuts down on the prep time, it cuts out frying all together.

However, these donut muffins are as indulgent as any fried donut with that melty butter and thick layer of cinnamon sugar coating.

How to make this recipe

This recipe is a simple mixture of flour, baking powder, baking soda, salt and the glorious Fall spices of cardamom and nutmeg.

If you do not have either cardamom or nutmeg, you can replace them with cinnamon in this recipe. Please note this recipe also calls for freshly grated whole nutmeg.

You can easily substitute this in equal amounts for ground nutmeg.

Next you’ll cream together butter and sugar then the eggs all of which you can do with a hand mixer or stand mixer.

Then add in to the butter sugar mixture the flour mixture, alternating it with milk and buttermilk until it’s just incorporated. This can be done with the mixer or by hand.

You don’t want to overmix the batter as it’ll create tough donut muffins. No thanks to that.

Bake for 20 to 25 minutes or until the tops of the muffins have just started to turn golden brown. Allow to cool until you can handle them.

For me, I always push the limits on this, so please use caution so you don’t burn yourself like I inevitably do. I just can’t wait!

Dip each donut muffin first in melted butter, being sure to swirl the top all around to get a good coating. Then dunk in a mixture of ground cinnamon and sugar.

If you’re like my daughter and want an extra thick layer of cinnamon sugar coating, you can repeat the dipping process first in the butter then the cinnamon sugar to achieve such results.

How to achieve moist and fluffy donut muffins

Can these Donut Muffins be frozen?

Yes! I would recommend freezing the muffins without the melted butter and cinnamon sugar coating.

I like to wrap them individually in plastic wrap and place them all in a ziploc bag. They’ll keep in the freezer for up to 3 months.

To thaw, leave on the counter at room temperature for 30 minutes then dip in melted butter and cinnamon sugar.

Or, to thaw quickly, unwrap the muffin and place in the microwave for 1 ½ – 2 minutes at 50% power or until thawed. Then dip and enjoy!

Can these Donut Muffins be made Gluten-free?

Yes these donut muffins can easily be made gluten-free!

These gluten-free flour alternatives tend to absorb moisture differently than all-purpose flour, so I wouldn’t using them in equal amounts in this recipe.

Looking for more donut or muffin recipes? Give these a try:

CHECK OUT MY VIDEO FOR HOW TO MAKE Cinnamon Sugar Donut Muffins (>1 MIN):

Cinnamon Sugar Donut Muffins are easy to make with the indulgent taste of a donut, dipped in melted butter and coated with cinnamon sugar.

Back in the Day Bakery Cookbook

SAVE THIS RECIPE FOR LATER! PIN THE IMAGE BELOW TO PINTEREST